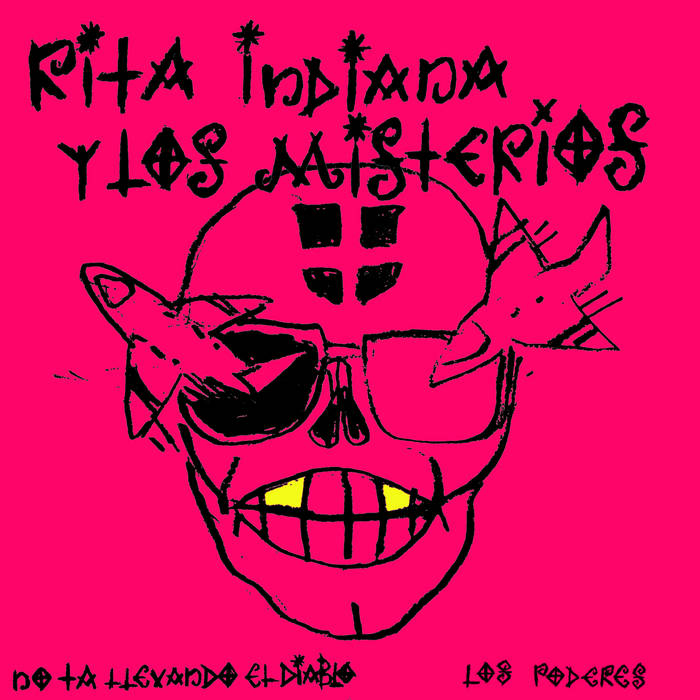 Since hearing their version of 'Sweet Dreams' am always disappointed that original doesn't break into Spanish when aired on the local MoR station played in my workplace. Favorite track: No ta llevando el diablo.


This former model first enjoyed fame as a writer. Her two novels, La Estrategia de Chochueca and Papi, enjoy cult status among fans of contemporary Caribbean lit. Her innovative writing straddled pop and street, leading to her current stint as screenwriter for Grammy-winning reggaeton group Calle 13's upcoming movie. But she's spent the last year taking over her hometown of Santo Domingo via a musical project, Rita Indiana y los Misterios. With effortless swagger, Rita has achieved the holy grail: cutting edge musical & lyrical innovations that draw on local roots and enjoy populist success. She regularly draws sell-out crowds of over 1000+ in the Dominican Republic, whether on her own or opening for visiting rockers like Franz Ferdinand.


Rita's powerful sound – which includes choreographed stage dancers, daring outfits, and a 5-person band – creates a space where old school merengue fans, new-school mambo thugs, hiphop kids, rockers, and fashionistas can all party together. She's performed live on Caribbean and Miami TV stations over a dozen times in as many months. Rita's low, powerful voice captivates listeners on sound alone, and her incisive, sexy lyrics display some of the smartest songwriting around. She sings in slang-filled, proudly Dominican dialect, refering to herself as 'la montra' (the monster). Rita Indiana was nominated for a 2010 Casanova Award (the DR's Grammy equivalent) as 'Best New Act' and performed at the star-studded televised ceremony. Her self-produced video for “La Hora De Volve” reached Perez Hilton, who declared: "Super caliente! We are obsessed with it - and HER!!!!!!!" Amazingly enough, her music has never been available until now...

The main reference points for this single, No Ta Llevando El Diablo / Los Poderes (The Devil's Takin' Us Away / Powers) are merengue, mambo de la calle, punk rock, and tropical club pioneered by Dutty Artz. “No Ta Llevando” clocks in at a breakneck 185 beats-per-minute. It's a ferociously catchy punk-mambo where güira scrapes and eerie synths compete with overdriven guitars as Rita Indiana's imagistic lyrics paint a picture of social decay. Grannies living in trash, kids smoking rock: her dark scenes get transformed into a hearty lust for life in true santeria/voodoo fashion. Recorded with Los Misterios in the DR and produced by Rupture & Shadetek in Brooklyn. Under her uncompromising attitude lies a true pop hit – don't be surprised when you start singing along. “No Ta Llevando” is a blaze of fire and intent from one of Latin music's most irrepressibly original newcomers.


The other song, “Los Poderes” splices occult themes into a sultry statement of love and potency. “Give me the powers, I know you've got them!” declares Rita Indiana. The backing track was created by Dutty Artz's Chief Boima along with Oro11 from Bersa Discos. Rupture then versioned the song by recording palo religion conga and güira percussion with Ivory Nuñez.


The older generation of Dominican musicians endorse Rita because they hear in her music a deep underlying respect for its formal intricacies. The younger kids see her as 21st century star, future in her sights.